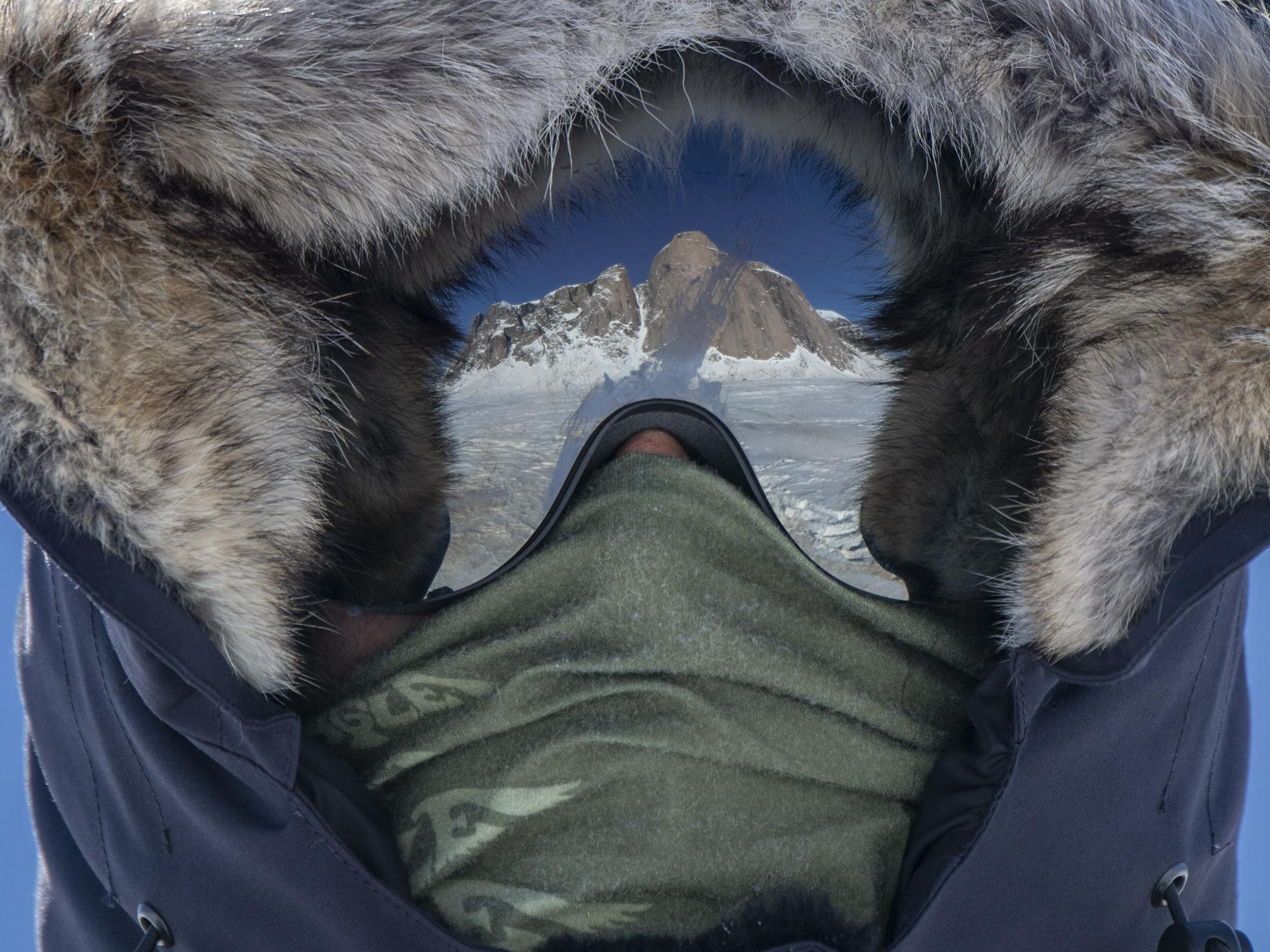 I watch Tabitha and Amanda walking out onto the sea ice this morning from the warmth of the inn. They’re testing their snowshoes in the soft snow and I can see by Amanda’s body language that she’s not happy where she is. Tabitha marches ahead of her by about 30 metres and turns around. Amanda is stopped in her tracks. Tabitha appears to be egging her on but Amanda isn’t moving. She shakes her head. Here on my warm perch, I don’t hear a word from either of them but I know what’s transpiring.

I see Amanda take a hesitant step forward and begin to walk out to Tabitha. She’s facing her fear. Tabitha and Amanda are the youngest and least experienced members of our team and, as team leader, I am keeping a sharp eye on both. Amanda is a California girl and looks and sounds the part. She has blonde hair, a beaming toothy smile, and, on the odd occasion, ‘like TOE…tally weights the end of her sentences to sound like a QUESTION.’ She’s only 24 and the coldest temperature she’s ever experienced is -8C (17F). She has never camped before.

We arrived in the village of Qikiqtarjuaq on the East coast of Baffin Island yesterday afternoon and are now acclimatizing to our new Arctic environment. It’s everything we had anticipated: icy cold, barren, and windswept—it’s -25C now (-13F) and the temperature is dropping fast. We’re above the Arctic Circle in a treeless ice-clad world that bears no resemblance to anything we’ve ever seen.

Last night while we were out gazing at the northern lights, a local resident hurried out to us and gave us a warning. “You shouldn’t be out on the sea ice at night,” he said, concern in his voice, “The polar bears come into town at night you know. They’re hunting now.”

We travelled here to make the crossing of Baffin Island’s Akshayuk Pass. This is an iconic route, the giant corridor of the Canadian Arctic boasting some of the largest granite walls in the world. The pass weaves an unlikely route through a seemingly impenetrable land of rock and ice, and spans a distance of over 100 kilometres from coast to coast. We’ve been planning this Arctic journey for over a year.

Our journey commences somewhat ungraciously by being bundled atop three huge Inuit sleds, called komatiks, and dragged for 110 kilometres across the frozen sea ice down the length of North Pangnirtung Fjord to the start of our route. The ice is anything but smooth and doles out a pounding reminiscent of an astronaut leaving earth. The temperature hovers around -20C with the windchill from the speeding sleds dropping it down to frigid levels. We’re wrapped up in every item of clothing we have—our Baffin polar boots, our big Canada Goose parkas with hoods, and our Native Eyewear goggles—making sure no skin is left exposed. It’s a long, cold day for everyone, with a mechanical issue making a slow journey even slower. It’s too late to begin moving when we arrive and we are forced to camp precisely where Parks Canada has told us not to.

“Head inland by 5 kilometres or so from the end of the Fjord” cautions Adam at our Parks Canada orientation meeting in Qikiqtarjuaq. “The further you are away from the sea ice the less likely you’ll run into polar bears.”

I don’t say anything to Adam, but I suspect the Parks Canada warning is more for travelers in summer months. At this time of year polar bears will be at the flow edge—the edge of the sea ice where it meets the sea—hunting seals and not up here at the frozen end of a locked-in fjord. The only bears we might run into are females with their cubs emerging from their dens. Female bears head inland to get as far away from the males who are disposed to killing their cubs. It’s a strange genetic reality for a creature that is already facing threats from a changing climate, but a female without a cub means another opportunity for a male to mate.

We’re a big group of 11 that will pose intimidating to a polar bear with cub, or so I hope, and it will steer far clear of us. We have no choice anyhow. We need to pitch our tents here because it’s getting dark.

Two enormous boulders form a large cave just near our campsite and we spy a tiny polar bear cub print close by. Amanda ensures that the cave den is unoccupied.

And so goes our journey across the Akshayuk Pass, building experience the honest way—by doing it. The team becomes ever more efficient at setting up and breaking camp and by day three are lighting stoves inside a tent like polar expedition pros. Our daily schedule of multiple 1-hour marches with a small break between them keeps the team moving and on schedule. We aim for a 17-kilometre march each day. It may not seem like much on paper, but in the Arctic while hauling a sled in soft snow in frigid conditions, the distance takes its toll. Everyone is tired at the end of the day with some members being pushed to their limits. No one has cracked yet.

On day four we take a rest at the base of an immense rock tower named Mount Thor. It’s a world famous peak for its verticality and has dominated our skyline for much of the day while approaching it. Thor is considered the storm-weather god of sky and thunder in Norse mythology and is an apt name for the goliath that rises above us.Mount Thor has the largest vertical drop on the planet. A rock dropped from the summit will plunge more than 4000 feet down its overhanging face before hitting the ground. To put this in perspective, Yosemite Valley’s renowned El Capitan only boasts a 2000-foot vertical drop. Thor is a beast.

As the days pass my concern for the inexperienced team members grows less and less. The conditions are cold and challenging but the difficulties are generally being met with determination and, on many occasions, even a smile. There is only one individual on the team having issues. This particular individual has completed a number of mountaineering expeditions over the years and I had hoped would be a morale booster for the team. The opposite is true. Instead of lending support and assistance this individual has become standoffish, confrontational, and unapproachable.

As a member of many challenging expeditions for the past two decades, including a world-record setting dash to the South Pole in 2009, I have come to realize that the single most important attribute for a contributing team member to a high performing expedition team is to have a positive attitude. Simply put, there is no place for negativity in an environment dripping with it. A difficult expedition is wrought with uncertainty that mires the mind of all individuals undertaking it. Self doubt, anxiety, and downright negativity are all part of the equation but these feelings, even though natural and expected, can’t be allowed to bubble up and hurt the team. Put on a brave face and get on with it, I feel. Everyone else is struggling too.

Amazingly, Tabitha and Amanda, the two least experienced members of our team, are doing exactly this. They’re upbeat and laughing most of the time (almost to a fault) and their attitude has become contagious. At the end of day five, huddled together in our eating tent waiting for our freeze-dried meals to reconstitute, Tabitha slips her meal into her jacket to capture some of its warmth. It’s something we were all doing. For whatever reason Tabitha’s Ziplock is not sealed properly and a big glob of its contents burps onto her clothing. Instead of screaming out in frustration, Tab beaks into a monologue.

“Aggh, what is this!!?…Food!…Food? Aggh, Did I just barf without realizing it!?…Hahaha!! I think I just barfed all over my clothing without realizing it!. Blaggghhh, here…blaggghhh there…and here. This is gross. Hahhha…” And off she goes into a silly verbal blitz about barf and spew that has herself and the rest of the team in hysterics. Instead of cursing and complaining, Tab jokes and laughs. The mishap obviously upset her but she turned it on its head and did the only thing you can do at that moment—laugh about it. Our unhappy veteran could learn a little from the expedition newbies on the team.

Our traverse across Akshayuk Pass is happening because our company—the leadership development company The AIP Group—is making it happen. The company was founded on the principle that the wild wisdom developed by leaders on extreme expeditions has a direct carry-over to the business world—and we’re here to prove it. The leadership learning around collaboration, communication and goal setting garnered by our team on Baffin Island can have a direct and relevant application for the modern business professional navigating a path through their own constantly changing the corporate environment. We’re filming everything on the expedition, and after the journey, we create a captivating video based adventure simulation that we share with business clients from around the world. We allow these leaders to virtually join this expedition—by watching various video scenarios and outcomes that we’ve filmed out here—and make critical decisions in navigating themselves across Baffin Island, as we’re doing now. It’s fun and exciting and is something we’ve done with numerous expeditions in the past.

The landscape we’re moving through is unlike anything any one of us has ever seen. Towering granite walls, among the tallest in the world, soar around us, the tombstones of giants from a mythological world. It’s the perfect environment to be tested as a team. It takes us eight days to complete our journey across the Akshayuk Pass of Baffin Island, but in those eight short days, something special happens. We experience something few ever do as we move through this fearsome world of majestic beauty. We discover the strengths and weaknesses of individuals but draw closer together as a team. And by the end something is different. The Akshayuk Pass remains unaffected by our temporal tale but in its presence, we’ve been changed forever. 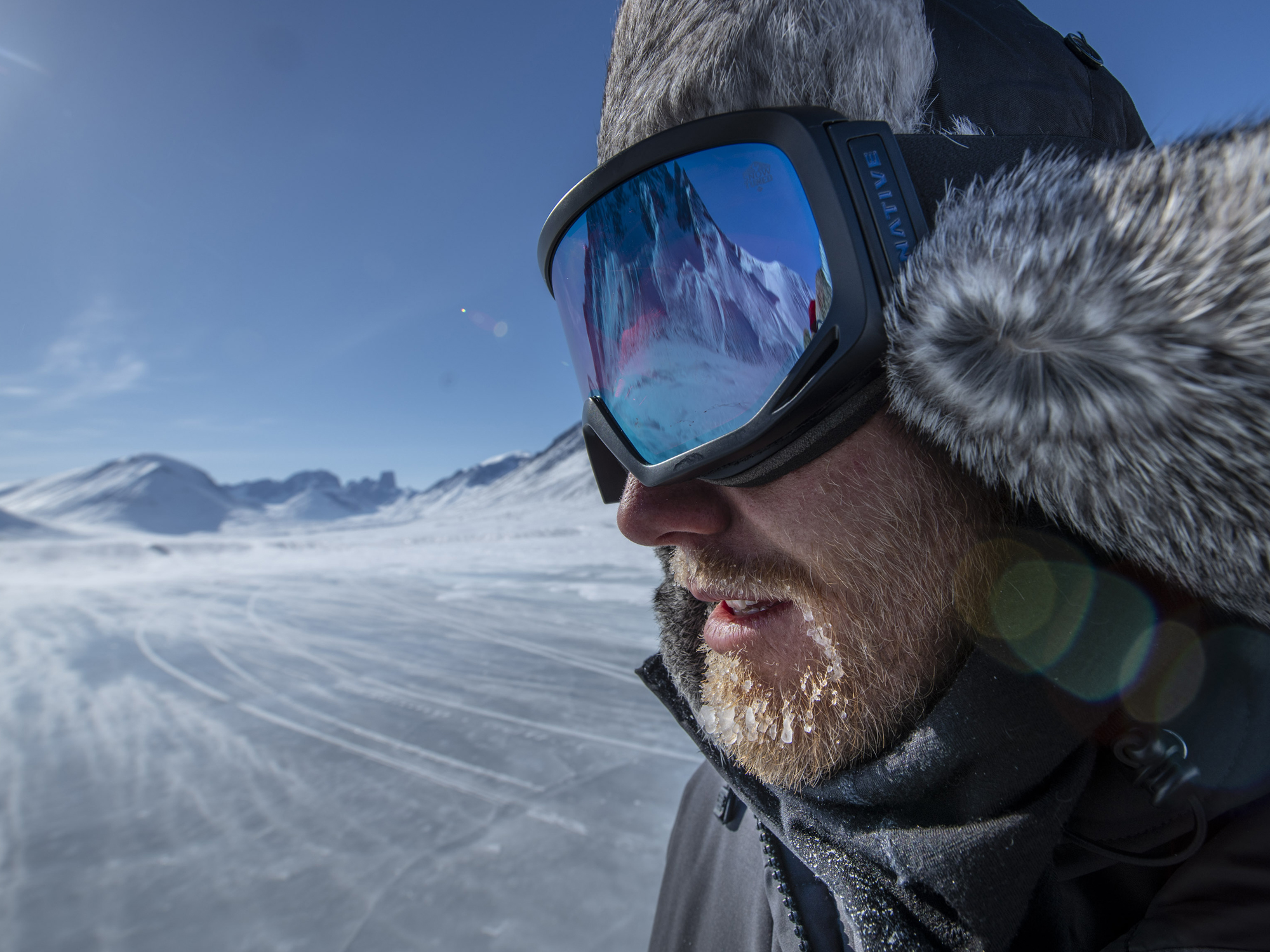