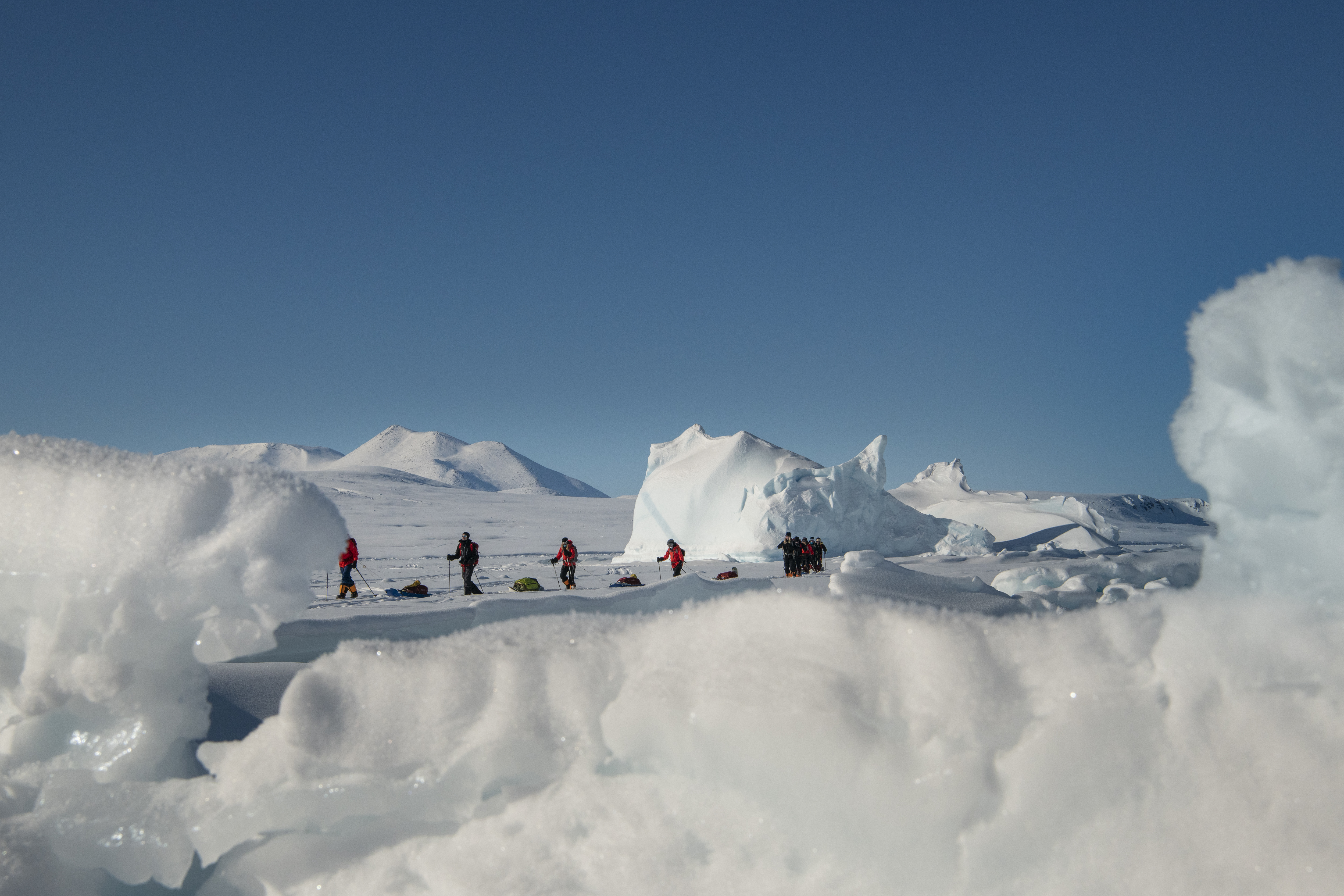 I watch Tabitha and Amanda walking out onto the sea ice this morning from the warmth of the inn. They’re testing out their snowshoes in the soft snow and I can see by Amanda’s body language that she’s not happy where she is. Tabitha marches ahead of her by about 30 metres and turns around. Amanda is stopped in her tracks. Tabitha appears to be egging her on but Amanda isn’t moving. She shakes her head. Here on my warm perch I don’t hear a word from either of them but I know what’s transpiring.

I see Amanda take a hesitant step forward and begin to walk out to Tabitha. She’s facing her fear. Tabitha and Amanda are the youngest and least experienced members of our team and, as team leader, I am keeping a sharp eye on both. Amanda is a California girl and looks and sounds the part. She has blonde hair, a beaming toothy smile and, on the odd occasion,‘like TOtally weights the end of her sentences to sound like a QUESTION?’She’s only 24, has never camped before and the coldest temperature she’s ever experienced is -8C.

It’s only a few minutes before we all join Amanda and Tabitha on the ice. Our job today is to acclimatize ourselves to our new environment and to run through gear and equipment before we head out tomorrow. There’s a large iceberg frozen into the sea ice a couple kilometers off shore and our plan is to trek out and explore it.

Before setting off we go about the business of priming and lighting our six MSR XGK stoves and erecting our four Helsport Spitsbergen X-Trem Camp tents. With the flurry of activity leading into to the expedition we haven’t had time to do this and practicing now in the safety of town before heading out ensures comfort for everyone.

Team members will each haul a sled tethered to their team daypack that holds a large duffel bag with all their clothing and gear for the journey. All additional gear and supplies - the fuel, tents and food - will be hauled by two outfitters accompanying us on snowmobile pulling traditional Inuit sleds called komitiks.

We pack up our sleds exactly as we would for our expedition and begin trekking to the iceberg. Without any discernable objects as reference it’s difficult to judge scale and distance in this landscape. We march in single file with myself in the lead and team members spaced evenly apart behind. The leading team members compact the snow for the team members behind making single file travel the most efficient way to travel in soft snow. It takes us nearly an hour of steady marching to reach our chunk of ice and we pause before getting too close. The sea ice around the iceberg is jumbled and uneven and creates spaces that aren’t readily seen.

“Raymond warned me about polar bears hiding around icebergs like this.” I say to the team. “Evidently they like to sleep in the hollows. Stick close together. We need to be careful as we navigate around it.”

Raymond is one of the outfitters joining us on our journey and we had a long chat earlier in the day about what we can expect out there. Polar bears are high on the list.

The iceberg has a blue tinge in its ice with a thin layer of snow sitting atop like vanilla icing on a giant slab of cake. Our cake is likely a kilometer in circumference and rises some 20 feet above the sea surface. Considering that 90% of an iceberg’s volume and mass sits below the water surface, our piece of cake is immense. Icebergs are the detritus of calving glaciers and this behemoth likely was borne of Greenland some 500 kilometers to the east across the Davis Strait.

We spend the next couple exploring an environment most of us have never experienced before. Only 48 hours earlier we were strolling the tree-lined streets of Ottawa in the warmth of spring. We’re now trekking on the frozen ocean miles off shore inspecting an iceberg the size of a small village all the time keeping a watchful eye for marauding predators that would eat us. It’s a mind-blowing change of locale that will need some time in getting used to. We’re all very excited and, frankly, a bit overwhelmed.

aPrevious: Arrival in Qikiqtarjuaq
Next: Baffin Island b
Tweet